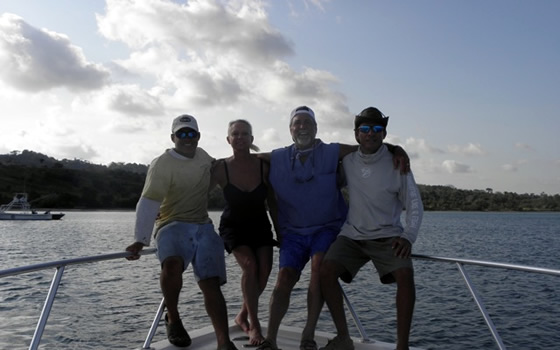 Here at Hooked on Panama, we had Rick and Rebecca Weisenburger from Murphy, North Carolina. Rebecca won the 2 day calcutta, with a 125lb. sail fish. Many more were released along with the winning fish.

Dorados, roosters and some small yellow fin tunas rounded out the trip. Double digit shots at sails were the norm everyday. Below are some pics of the fun, and Rick says, beware of the flying remoras. You just never know where they are going to attach themselves.

Fred Stephens from Adventure Sport Fishing was here this week, also. Fred came down for a little R&R with Silvana and his brother Mike. For these guys, it was mostly a surfing adventure, and the waves rocked this week. They did manage to get in a few hours of fishing though. Silvana caught her first sail, Mike released one, too, and Fred got a 42lb. Cubera Snapper of the point. Not bad considering they spent most of the time in the water on boards instead of fishing.

Captain Victor and his mate, Jacinto, did a great job and good fun was had by all.