January fishing has been incredible 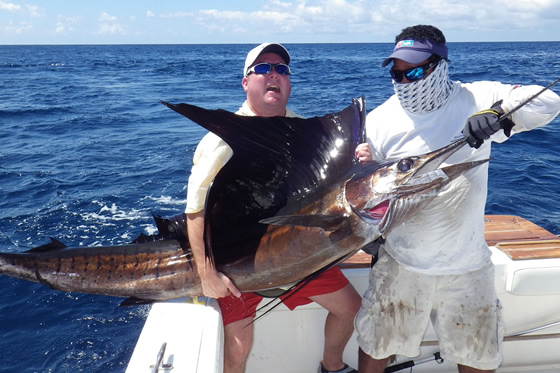 We had Kirk Sieber, Fred Spiker and Greg Sandoz here for their 5th year in a row with us.  It’s always fun when the Louisiana men show up, nothing but good times here at the lodge.  Just wish they would bring me some budan!  They were here fishing for three days along with another group also from Louisiana Doug Miller, David Dorsey and Torey Primeaux and imagine that they all knew each other.  Of course there was a Calcutta involved which was won by Kirk and his group.

For three days all were in the dorado’s, sail’s and tuna’s.  This week it was a lot harder getting the fish to take the hook.  According to the Captain’s and anglers there was a lot of life on the water, bait everywhere.  Making it most difficult to lure them away from what they were feeding on.  21 dorado’s were landed, releasing more than half, landed 3 sail’s, 2 yellow fin tuna’s 1 snapper.  4 marlin raised and1lost at the boat!  Now that’s fishing!!!!!

Fred Spiker landed an estimated 180 – 200lb yellow fin tuna, while Greg Sandoz lost his marlin at the boat and will have to return once again for his marlin on La Chiricana with Captain Victor and Mate Jacinto. 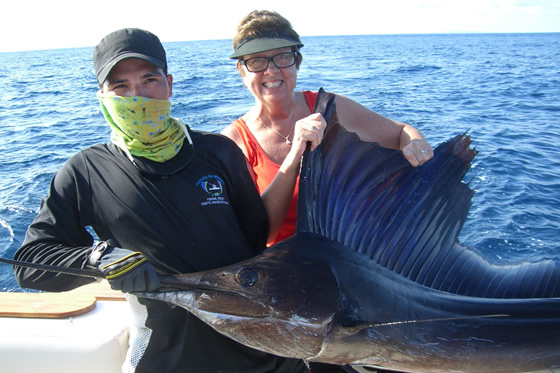 David and Lori Erickson along with their friends Tim and Diana Logan all from Montana joined us here right after the Louisiana group.  They were fishing for 4 days on Miss Baru with Captain Oliver and Mate Carlito.   This week the water was still full of live bait with lots of activity on the water.  Once again the challenge was on to landed them on the boat.   6 yellow fin tuna landed, 2 estimated at 65lbs one of which was Lori’s first tuna and 1 estimated at 70lbs which was caught on a spinning reel by Tim.  Also landing 6 dorado’s, 4 sail’s.   One sail a first for Diana was estimated at 120lbs.  On the inshore fishing they landed 3 roosters, 1 rock snapper and 1 amberjack.