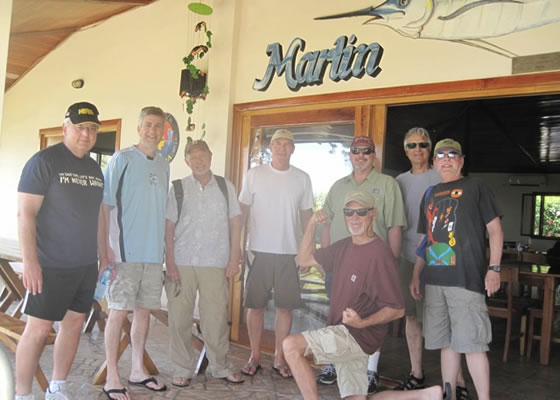 The gates, weighing as much as 700 elephants each, opened slowly like the entrance to King Kong’s Village.

The specialized locomotives started to pull forward as the Queen Elizabeth entered the lock with inches to spare on either side as the lock began to flood.

Thousands of people crowded the rails to experience every moment of this marvel of engineering in operation.

Panama. It was my first day in the country and I quickly forgot the rigors of International travel as Panama reached out to embrace me.

Panama, the paradox on full display. A tropical lush garden with a major growth spurt in full progress.

Panama City, with it’s skyline to rival Miami, is energizing all of Central America as construction is under way in every direction.

Panama is doing business with the World while it emerges from a checkered past to claim its rightful place in the new global economy.

It was my first date with Panama and as it turned out, it was a perfect evening.

I’d come with my crew to spend a week at the aptly named Hooked on Panama Lodge in Puerto Armuellas just steps from the Pacific Ocean.

A week of fishing and no responsibility. A week of intense sport punctuated by guilt free napping, fresh homemade food, cold drinks and people as warm as the tropical sun to help enjoy it all.

The Lodge is an eco-friendly, self sustaining oasis set in its natural surroundings without destroying or disturbing the environment.

The large, comfortable, fully air-conditioned cottages are positioned so that they all face the sea just a few feet beyond the inviting pool and spa.

The main building, game room, bar and restaurant were built to create a minimal impact on the forest which has grown down to the water’s edge.

We arrived at 9:00 o’clock after a flight from Panama City to David and then a comfortable van ride to Puerto Armeullas and the Lodge.

After a refreshing night’s sleep, we returned to the main Lodge for fresh brewed coffee and breakfast to order before heading down to the custom made 37’ fishing boats.

They were built on site for speed and comfort, with ample room on the fishing deck, low gunwales in order to really work the toughest fish, and an extended cover so that everyone on board had enough shade.

Both Captains and deck hands spoke excellent English and learned everyone’s name immediately which really helped to assist when we got into a major bite and had several fish on at the same time.

Our Captain, Victor, huddled with us before we left and explained his plan for the day and let us know that our input was valuable too as his mission was to catch fish and make sure we had a great day. Though it was truly a team effort, in the end we simply told Victor we’d follow him and that he was El Jefe.

We caught 10 or 12 bonito within minutes to use later in the day for Black Marlin or Yellow Fin Tuna both of which had been sited earlier.

While we tracked after the monsters we ended up in the middle of a mad boil of huge Dorado with bulls weighing over 50 pounds, and several times all four fisherman were wrestling big fish at the same time while Victor maneuvered the boat, and Jacinto talked the combatants through the ballet of who goes under or over as we all worked our fish.

Everyone on board tied into a Sailfish during the day, along with some prehistoric Roosters and a nice Tripletail that volunteered to become fabulous ceviche.

Victor suggested how important it was to fish responsibly and protect the fish population. We quickly agreed and kept only enough to eat that night as well as providing for the families of the boat crews and Lodge staff.

The action was terrific on both boats for all three days. The experience was so great that no one minded hearing the same tired old stories of who they dated in high school and at the end of a perfect day on the water, there was always someone to welcome us back home with icy Pina Coladas in the blender.

Unlike most Lodges, where you are merely a paying guest, at Hooked on Panama Lodge you feel like family on vacation and, as the sun set, Chef Margo presented a sumptuous three course dinner with complimentary wine and beer.

A game of pool, an hour of Texas Hold’em, or a cigar on the veranda and we were ready for a good night’s sleep in order to do it all again the next day.

My posse of 8 fisherman are all now solidly hooked on Hooked on Panama Lodge.