Fishing Report for May 23th 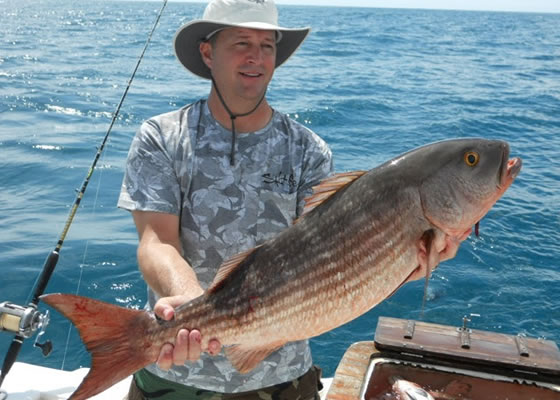 This week we had David Speeza and Tom Bible from Florida, joined by their friend Steve Canfield from Tennessee.

The fishing is still great!

Day 1 was tuna day. Got 4 nice yellowfin tuna with the biggest one topping out at 150lbs. That afternoon when they returned, Tom made a comment, ” Normally I would have thought, 4 fish, no big deal, but after spending 1 1/2 hours on the big one, that was enough for me.” Chef Margot’s new spicy tuna recipe is rocking the house!

Day 2 they went on a marlin hunt. Not as hot as the last group, but they did raise 3 marlin and hooked and released one. Picked up a dorado on the way home, and a couple of nice roosterfish on the point.

Day 3 they wanted to do some inshore fishing. Spent pretty much the whole day at the point and caught quite the mixed bag of roosters, a big cubera snapper, mullet snapper, rock snapper and a needle fish that was 5 feet long. Thing looked like a dinosaur! Check out the pics below or click the link to view past reports and pics.They had a great fishing trip, with a wide variety of species caught. Left early this morning to return back to the real world.

Next week, we have 3 different groups coming and I’ll have more reports to follow. The tuna are still biting and getting closer to us everyday:)