Fishing Report for May 16th 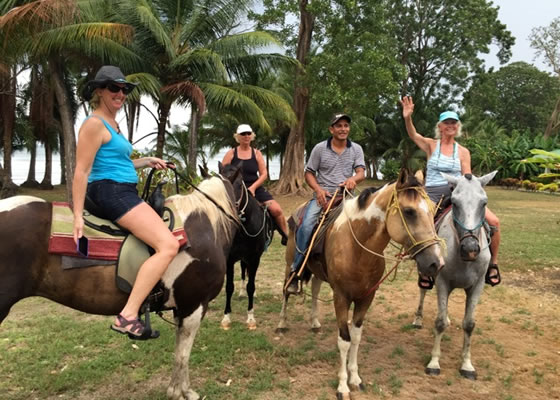 Here we go with a new fish report from Hooked on Panama Lodge.  Week ending May 15th, 2015.

We have Gary and Sheryl Meyer.  Their son Perry and his wife Kelly.  And of course, Bad Betty Rawalt:):)  This is Gary, Sheryl and Bad Betty’s third trip here together.  This was Perry and Kelly’s first.

It was a good week.  1 Black Marlin out of shots at 5. Perry and Kelly took turns on the rod and it was their first Marlin. Kelly got her first sail.  They got 3 yellow fin tuna in the 80 to 100lb. range.  4 roosters with Perry’s topping out around 50 pounds.  8 snappers of a good variety. Cubera, mullet snapper and yellow tail snapper.  2 blue jacks.  And a ton of  small yellow fin tuna and dorados.  The dorados were tiny, but they made the best dorado burgers with wasabi mayo, for dinner.

Just like last year, they came up on a shrimp boat and traded a case of beer for about 12 pounds of fresh shrimp.

Dinners went a little like this.  Lots of shashimi, seared tuna, shushi rolls, shrimp cocktails, ceviche, whole fried fresh snapper and one night, Margot ( the chef with the most ) made her amazing shrimp consume, that she drizzled over grilled snapper and garlic mashed potatoes.  OMG!!!!!!  Kelly and Perry said it was probably one of the best meals they have ever had and I got a pic below of Kelly actually licking her plate:):)

The girls got a little horseback riding in and Perry serenaded everyone his last night with his own version of songs.

Perry and Kelly had to leave us today:(  But, Gary Sheryl and Bad Betty have another week and are being joined by their friends, Dave and Norma Creighton.  Which means I’ll have another report soon.

Until next week, tight lines.