Fishing Report for May 15th 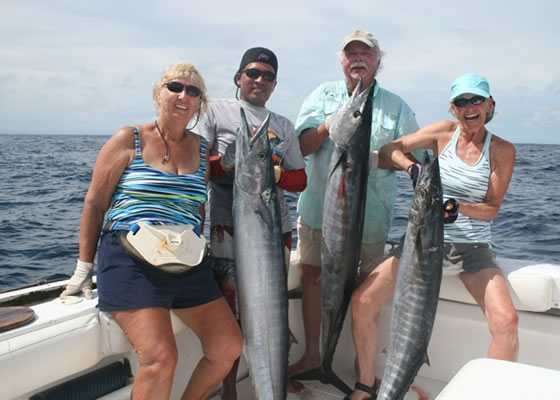 Ok everybody, here we go again… as of our last report from Hooked on Panama Lodge it was all tuna, dorado and sail-fest with Gary and Sheryl Meyer and their friend Bad-Betty Rawalt.

Now, so far this week it’s been Marlin Madness!

Day 1, was a lodge record.  They raised 15 marlin, yes, I said 15 black marlin.  They hooked 11 and managed to release 3…on just one boat. The small dorado doesn’t even really count after that:) We’ve got a new secret spot, but, as the saying goes…if I told you where it was, I’d have to kill you 🙂

Day 2, the trio raised 4 marlin, and only released one… with a funny story.  These guys like to catch bonito on fly rods for fun. So, Bad Betty had a bonito on, but she was reeling it backwards, so it was going out, not in:) She was almost out of line, when Gary notices and says, SHIT!!!! Gary takes the rod and starts reeling away.  300 yards later and 30 yards from the boat, a 400lb. blue marlin goes on the attack,  the marlin eats the bonito, Gary pulls it out of his mouth, he eats it again, Gary pulls it out, because it was on his light weight fly rod.  Captain Oliver is up top yelling… “Get That Bait Out of The Water”,  Jacinto the mate is rigging another live bait as fast as he can on a heavier rod, and so on.  Ok… so you can imagine it was a Chinese Fire Drill :):):)

Betty is no longer Bad Betty.  She is now Bad Backwards Betty:)

Day 3.  Still Marlin fishing.  Raised 5, hooked 5 and released 3.  The last one was a black marlin, well over 600lbs. Got some good photos below, but not one that actually showed the scale of this fish. It was huge, and Betty said it was the size of our 22′ Panga.  Ok, she might have exaggerated a bit.  Gary, Sheryl, Bad Betty and mate Carlito all took turns on this fish. Another funny story for this day too.  Gary has a live bait out,  marlin comes in and inhales it.  The fight is on for a bit, then the line goes slack.  Gary says it again, SHIT!!!! But, he can still feel some weight on the line as he’s reeling it in.  So, he reels it back to the boat, and he now has 2 bonito on.  The one that he set out, and another one that got hooked, INSIDE the stomach of the marlin.  Right in the eye no less and partially decomposed.  No wonder he didn’t get hooked up:)  I can’t make this stuff up!

Day 4.  Finally quit marlin fishing, but that doesn’t stop these guys,  It was now wahoo day!  They got into a wolf pack of wahoo, right next to the shelf, west of Isla Ladrones.  Double hook ups and triple hook ups.  Lost several but did manage to get 7 really nice ones.  Caught all of them on Rapalas.  There were other boats there actually cheering them on.  Our chef Margot made wahoo ceviche for us, and seared Wahoo steaks for dinner:)

So, raised 24 Marlin, hooked 18 and released 7.  These guys have set 2 new lodge records in one week.  15 Marlin raised in one day, and 7 big Wahoo caught in one day. Needless to say, after all the action they are flying a bit high right now,  they have opted for their last day inshore fishing at the point,  fishing for roosters and snappers.

They are planning their dates for next May. And, if anyone else wants to be here when these guys come, it might not be a bad idea.  This is their 3rd trip with us, and every time they come, the fishing is off the hook:)

You have to check out the eyeball shot of the marlin right next to the boat.  Hey, I also had to include at least one photo of Tigresa the wonder dog.  Enjoy the pics.

Tight Lines everyone and more to come.