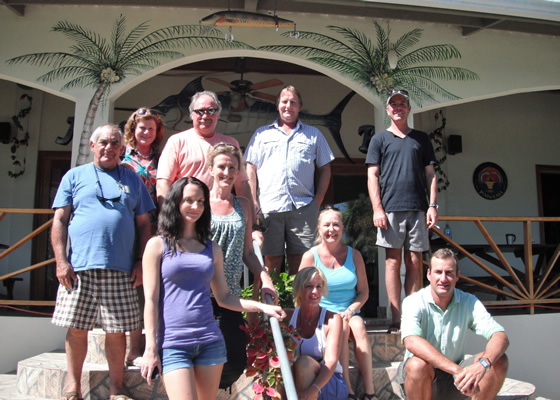 Our new friends from Botswana and Tholo Safaris fished with us for 5 days.
They were on break between SCI Shows so decided to come down and warm up before the Vegas Show.
Clive, Linda, Kim, Schalk, Mark, Mary Lou, Mel, Grant, Victor and Julie great group of people we didn’t want them to leave!
They took turns fishing with Captain Victor and Mate Jacinto on the Chiricana and with Captain Chaka and Mate Carlos on the Miss Burica, while some stayed back to just relax by the pool or laid in the hammocks at the Rancho. They landed 5 Y-Fin tuna, 10 dorados, released 7 sailfish, 4 roosters and 2 pargo snappers. They raised 7 Y-Fin tuna, 21 sailfish, 18 dorados, 3 marlin, had 2 few more marlin on but lost them along with a few smart pargos 😉