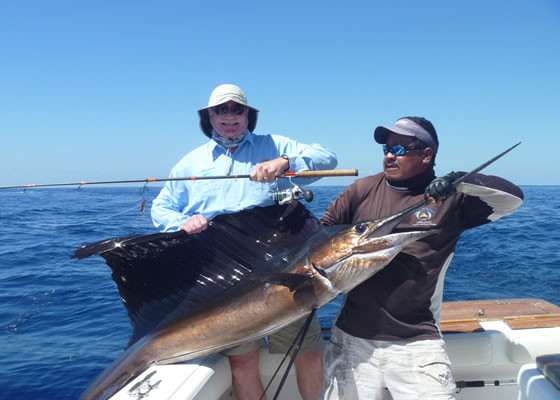 More Texans here at the Lodge!  We had Rusty, Alan and Tom all from Taylor TX here for their 60th Birthday Celebration!  They fished with Captain Chaka and Mate Carlos.  Their first day was a half day trip upon arrival to the lodge and they were off to a great start with Tom releasing an estimated 350lb black marlin.  During their stay they released 13 sailfish, 1 marlin, landed 5 dorado and raised 1 marlin and 35 sailfish.  Two of their sailfish were caught on Al’s homemade spinning rod with 15lb test and light spinning tackle and another sailfish was caught on a fly rod but lost it.  Al said the only bad part was that they didn’t stay long enough!  Next time they will correct that and add few more days.