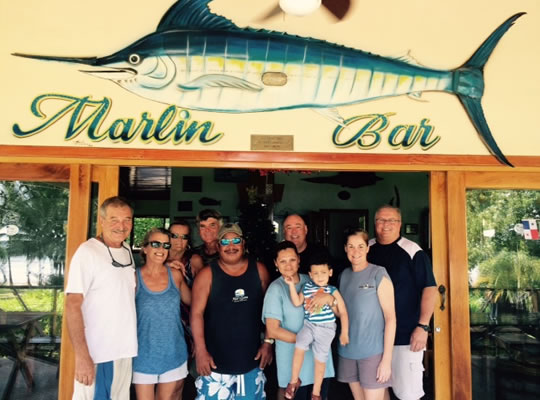 Hi everyone from Hooked on Panama.

Well the new season is here and this week we had John Kipp, his wife Alicia and son Andres.  John and his family fished with his sister Robin Shea and brother in law Mike Shea. On day one for Johns family they got a special treat with an encounter of 6 killer whales playing by the boat. Fishing was slow the first day however, Robin released her first sailfish and Alicia catching a small tuna.

We also had Tomas from Frontera Wingshooting of Argentina with his wife Clarita, 3 daughters Clarita, Carolyn, and Victoria and last but not least the beast on the pole little Tomas Jr.

They fished 3 1/2 days and  raised 4 Marlin, some small tunas, plenty of bonitas , Pargo, and released over 8 roosters while fishing with Johns family the last day.  To top off the fishing they also saw larges pods of dolphins, large schools of yellow fin tuna jumping out the water feeding on bait fish with flocks of sea birds joining in on the meal. It was a National Geographic moment.

An exciting moment for John was his son Andres got his first fish at 2 years old.

Many thank’s to Tomas and his family for visiting Hooked on Panama.