A Great Week for Fishing 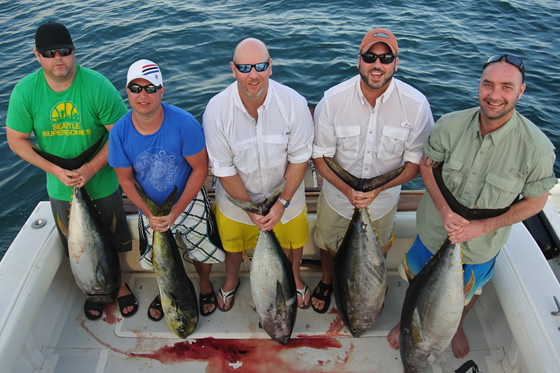 Jan. 14 -17, 2013, We had Fishing with Larry’s hosted trip with Brad Staples as host of the group. They were here for 4 days of fishing and the group consisted of 10 anglers. For 4 days all boats were in the dorado’s and sail’s. Over 50 dordaro’s were landed, releasing most of them, also the group raised over 40 sail’s landing 30. 1 Marlin, 2 roosters and 2 pargo’s were also landed.

We had two returnees in the group Wolfgang Gielisch and James Haecker. Wolfgang, James along with Larry Zacharias fished on La Chiricana with Captain Victor and Mate Jacinto. Wolfgang and James got 2 roosters, while Larry has to return to try and get his, all had their share of sails and dorado’s.

Kurt Rathjen and Mary Ann Rzecznik fished on Miss Baru with Captain Oli and Mate Carlito. This was Mary’s first time at big game fishing and she was up for the challenge. Mary Ann brought in a 150 lb sail, 50lb dorado and a 50lb pargo all estimated. Kurt also brought in another pargo. The two of them also had their share of dorado’s and sail’s through their trip. Mary said what she love best about her fishing experience was the thrill and challenge of stand up fishing.

Gary DeMoss, George Prudhomme, Jesse Williams, Dave Sugrue and Peter Collins a group of friends fished on Miss Burica with Captain Chaka and Mate Carlos (aka) Mata Gato. George brought in the biggest tuna estimated at 65lbs while Jesse landed a blue marlin estimated between 250 and 300lbs, again all had their share of sails and dorado’s.

Hope you enjoy the fishing photo’s of their trip. I have more photo’s on Aqua Adventures Panama facebook page.